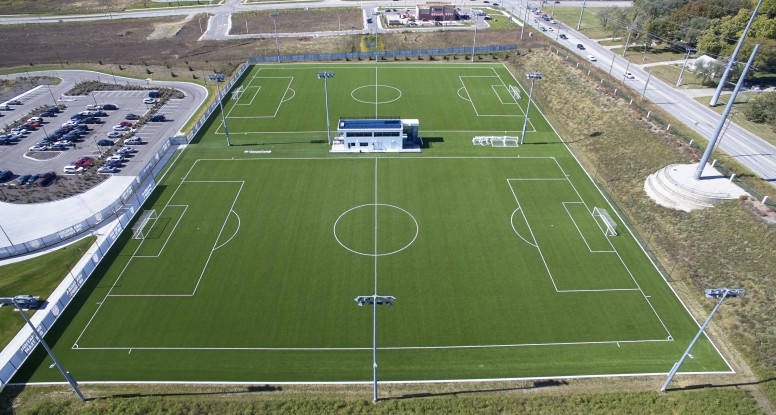 GreenFields USA is proud to announce that it is now the official synthetic turf partner for both Sporting Kansas City and Pinnacle National Development Center, the club’s world-class training facility.

It’s not only Sporting KC players who will enjoy the top-of-the-line playing experience — U.S. Soccer also uses the facilities for its coach- and referee-training sessions. IRONTURF’s patented woven technology is unmatched for playability, durability and safety.

“With the recent opening of Pinnacle, Sporting KC has continued the club’s tradition of constructing and operating world-class facilities in our pursuit of excellence and championships,” said Dan Lolli, Vice President of Operations for Sporting Kansas City. “Partnering with GreenFields to install IRONTURF at Pinnacle fit perfectly into our objective of pushing the envelope for those using the facility.”

In addition to the two fields at Pinnacle, Sporting Kansas City has also opted for GreenFields turf in several of its other state-of-the-art facilities. These include:

“This is an exceptional soccer team,” said Avery Gallaher, director of operations for GreenFields. “We’re excited that they’ve chosen IRONTURF, made with the strongest fibers in the world, as a long-lasting part of their future.”

IRONTURF is quickly becoming the turf of choice for the country’s toughest sports, with recent installations at Charlotte Motor Speedway, University of Arkansas – Pine Bluff, and more.