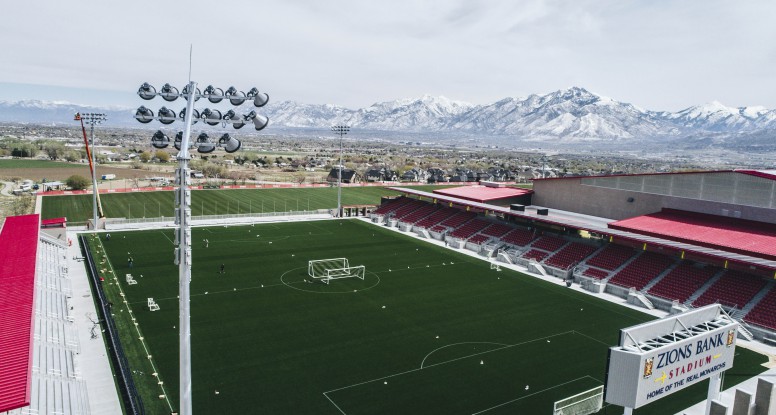 GreenFields USA is proud to announce that its premium woven turf has been chosen by the Real Salt Lake (RSL) soccer club for three soccer fields at its new facilities in Salt Lake City.  The fields are major components of the Zions Bank Real Academy Stadium and Training Complex, which opened in late April and is positioned to become one of most significant sports facilities in the Western United States.

RSL chose GreenFields woven turf for both the stadium and training complex. The turf is constructed using patented woven technology and is unmatched for playability, durability, and safety.

According to Real Salt Lake General Manager and Vice President of Facility Operation, Craig Martin, Real Salt Lake selected GreenFields woven turf because it has the most natural play characteristics – including ball roll and bounce – and most closely matches the performance of the natural turf at RSL’s home stadium, Rio Tinto.

“GreenFields attention to the detail when it comes to turf characteristics and properties really made the difference in the way that turf looks and plays,” Martin added.

Kevin Guffey, Director of Operations for GreenFields, calls the installation, “One of the most exciting projects we’ve ever been involved with.”

Guffey continues, “RSL is a world-class club, and they’ve done a world-class job at the stadium and training center.  We’re proud to be a part of it.”

Guffey also acknowledged Academy Sports Turf, which distributes GreenFields products in Utah, as well as Wasatch Commercial Builders, which was responsible for construction and installation on the project.