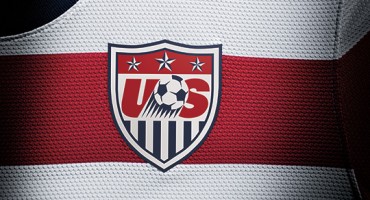 GreenFields – a leading supplier of artificial turf systems – announces its entry into the US market. From the 2014 season, GreenFields sport systems will be available throughout the United States of America and Canada through a selected network of experienced representatives and quality installers. All GreenFields sport systems are quality controlled on site by GreenFields installation inspectors. Technological innovations and sustainable solutions are the core competences of GreenFields, delivering customers integrated sport systems using TenCate high-grade fibers and backing.

ADO Den Haag will be able to play at home against FC Twente on Saturday 26 October on a new artificial grass system based on the TenCate Evolution™ fibre. It took only two weeks to lay the artificial grass pitch at the Kyocera Stadium. The team selected by coach Maurice Steijn was able to train again at the stadium for the first time on Wednesday 23 October. After training, both team and coach said they were very happy with the new pitch.

Next year the World Cup hockey will take place in The Hague from the 31st of May till the 15th of June. GreenFields is very proud that the KNHB in an earlier stage has chosen for GreenFields TX as the official WC pitch. In order to provide the best training facilities for the teams that have already qualified for the tournament, the GreenFields TX pitches are being installed at several hockey clubs in The Netherlands. Most of the pitches are installed in the area of The Hague but nevertheless also other clubs in The Netherlands have chosen for this WC pitch.

Starting next season, matches at the Lavans football stadium in Helmond will be played on GreenFields MX. The reason why the club chose GreenFields MX is that artificial grass is much more flexible. All the teams can train on the main pitch. According to Mario Captein, the general manager of Helmond Sport, another factor that played a role was the large number of matches that had to be cancelled last winter. The artificial grass pitch also offers possibilities for expanding the functionality of the present sports complex, such as hosting special events or organising football clinics. Because the new pitch means all the activities can now be centralised, the Lavans stadium will come alive with even more football action. 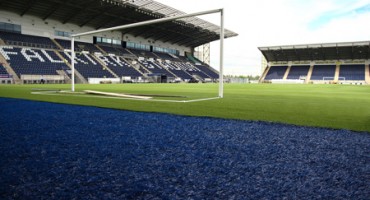 Falkirk FC has appointed GreenFields to install an artificial pitch at the Falkirk Stadium.  The installation started on the 25th June, after the Status Quo concert, and will be completed for a first home league game on 17th August. This will be one of the first new generation of woven synthetic turf systems to be installed in the UK. It is specifically designed for football and will have an enhanced appearance through the use of a green infill.

TenCate Grass and GreenFields have been awarded the tender by the Dutch Coöperatie Eerste Divisie for installing high-grade synthetic turf fields for professional football in the Jupiler League in the Netherlands. The installation of the first GreenFields pitches will already begin this summer. In this way the Jupiler League is building on the successful introduction of the latest generation of synthetic turf systems in the Premier Division in the summer of 2012. 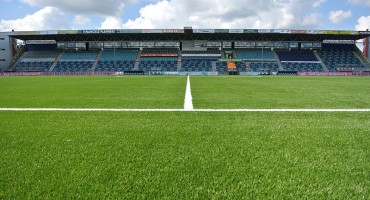 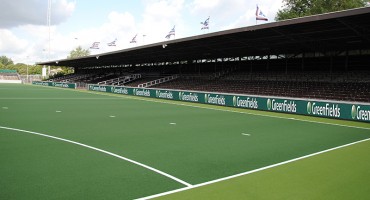 This summer, GreenFields is delivering a GreenFields® TX artificial grass hockey field to the Dutch National Hockey Stadium in Amsterdam. The same high-quality artificial grass system was chosen for the Rabobank Hockey World Cup 2014 in The Hague, to be played next year in the Kyocera Stadium and the neighbouring – temporary – GreenFields Stadium.

On Thursday 24 January the Royal Dutch Hockey Federation (KNHB) organised the first press conference regarding the Rabobank Hockey World Cup 2014. The tournament will take place from 31 May through 15 June 2014 in the Kyocera Stadium of ADO Den Haag. During the Hockey World Cup The Hague will be the hockey capital of the world and thus the heart of all activities. A worldwide sporting event in combination with attention for international developments and cultural integration by means of sports, music and food. 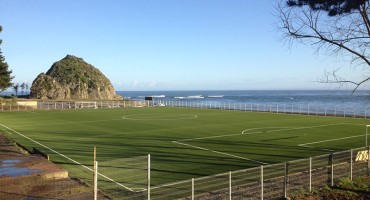 GreenFields create a symbol of hope for a devastated community

GreenFields have installed a new artificial turf pitch at Mutrún Community Football Stadium that was completely destroyed an earthquake and tsunami in 2010. The city of Constitución on the coast of Chile was hit by a huge earthquake and tsunami on 27 February 2010. Over 350 local people were killed and many buildings were destroyed. 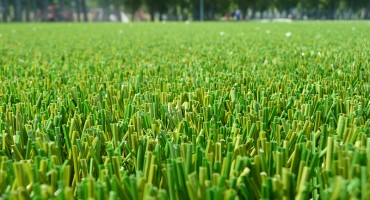 Vienna, Austria – As part of the refurbishment of the Hanappi stadium in Vienna, recently two new 100% recyclable artificial turf fields emerged. The artificial turf installed is the GreenFields MX which is the first product of the latest ‘green’ generation of artificial turf products. Both fields were built by the company Strabag AG and meet FIFA 2-Star criteria. 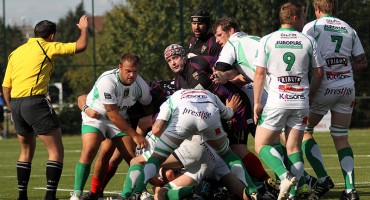 Maidenhead Rugby Union Football Club (MRUFC) is to become the home of the very first new ‘One Turf’ pitch. This is the new global specification for dual use pitches which has been approved by both the IRB and FIFA and delivers the best possible playing surface for both sports. 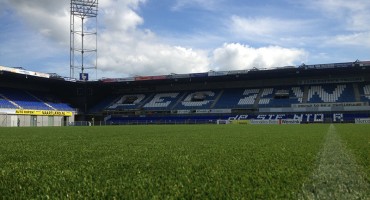 After an absence of eight years, PEC Zwolle is now preparing to re-enter the Dutch premier league. PEC Zwolle endeavours to become a stable premier league club. And that deserves a field that is worthy of the premier division in every respect. The club has chosen an artificial turf field produced according to a patented 3D technique from TenCate for producing artificial grass clumps, which is sold worldwide by GreenFields, a subsidiary of TenCate.

In the 2012 / 2013 season the premier league club Heracles Almelo will be playing on an innovative synthetic turf pitch from TenCate, which is based on patented weaving technology. This is the first official synthetic turf pitch in which a number of new developments have been combined, resulting in optimum ball and playing performance and full recyclability of the pitch. The club has thus achieved a world first. These technological developments will also be used for the main pitch in the new Heracles Almelo stadium that is to be built.

GreenFields’ sets the benchmark for community football facilities in Chippenham

The Football Foundation, local Member of Parliament and internationally renowned football freestyler, Billy Wingrove, all praise the new GreenFields artificial turf pitch in Chippenham (Wiltshire), England. The opening of the new GreenFields pitch constructed within the FA Framework coincides with Stanley Park winning the award for “Public Sector Outdoor Facility of the Year” at the Institute of Groundsmanship (IOG) National Industry Awards.

As part of the 2012 London Olympics and 2014 Glasgow Commonwealth Games legacy strategy, GreenFields have installed a new dual use artificial turf pitch certified for both Rugby and Football usage. Following the legacy strategy, pitches can still be used after the Olympic Games. The new pitch, which is only the third of its kind in Scotland, will serve the local rugby and football clubs as well as providing access for numerous smaller community clubs and local schools. 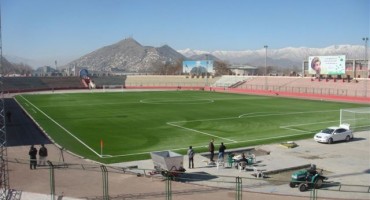 The U.S. Army have transformed Kabul’s former Olympic Stadium with the installation of a GreenFields’ artificial turf pitch. The refurbished stadium in the capital city of Afghanistan symbolizes progress as NATO forces increasingly withdraw from this country and, in particular, will also help to encourage women’s football in Afghanistan.

A GreenFields dual use football and hockey pitch, installed at the Father Agnel School in Mumbai, India, has been chosen by a joint team from the All India Football Federation (AIFF) and FIFA as the solid base for one of the first national football academies in India. The Fr. Agnel Multipurpose School in the Vashi suburb of Mumbai opened in 1982. It has worked hard to ensure that the students have access to good sports facilities as an integral part of their education. The school’s investment in a GreenFields synthetic turf pitch has now been recognised by the AIFF and FIFA who have chosen the school as one of four new residential football academies in India. 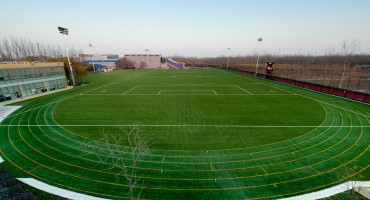 GreenFields has successfully installed their first dual use FIFA and IRB certified artificial turf pitch in China. The prestigious Western Academy of Beijing chose GreenFields for their popular pitch construction and their focus on quality for the installation process. The Western Academy of Beijing (WAB) is an international school set up in 1994 to accommodate the growing expatriate community in Beijing. Currently educating over 1,500 children from 57 different countries, ranging from kindergarten to high school, the school has to offer a range of sports facilities to accommodate all ages and cultures.

Read More›
Page 4 of 7« First«...23456...»Last »
We use cookies for social media functionalities, analytics, personalised content and advertising (including on 3rd party sites). By clicking 'Accept' or continuing to browse our site and clicking through, you agree to such use and to the sharing of your data with our partners. To find out more about our use of cookies, our partners or how to withdraw your consent see our Cookie Notice.AcceptCookie Notice